There’s plenty of tutorials out there on using Simplex or Perlin noise to make terrain. It’s even included as an example in my library, bracket-noise (a port of Auburn’s excellent FastNoise to Rust).

If you’re in the business of making planets, it can be frustrating that most noise setups don’t wrap around at the edges: you get great terrain, but there’s a seam along the east/west axis if you wrap it around a sphere.

Get Started With a Bracket-Lib Skeleton

Start by making a new Rust project with cargo init <project name>, in whatever directory you like to store your source. Then edit Cargo.toml to include a dependency on bracket-lib:

With that in place, you want a pretty minimal main.rs file. You’re going to refer to a worldmap.rs we’ll be building in a second. This is just enough to render the map once, and keep it on screen in a window until you close it:

Setting up the noise

You’ll be using bracket-noise, part of the bracket-lib family to generate the noise. Make a new file in your project’s src directory, called worldmap.rs. Start by including the bracket-lib prelude, and a structure in which to store your calculations:

You also want a constructor. This is where you set the noise parameters; I played around until I liked them, I encourage you to do the same:

The real magic comes from sampling Simplex noise as a sphere in three dimensions. Projecting an altitude, and latitude/longitude pair to a set of 3D coordinates is quite well established map. Add sphere_vertex to your implementation:

Next, make a function called tile_display. It starts by converting x and y coordinates to latitude/longitudes in radians:

This is a linear projection, and will distort a bit - it simply scales the current render location to -90…90 on the latitude (y) side, and -180..180 on the longitude (x) side. It then uses the resultant coordinates to calculate a sphere location with a constant altitude. Use lower altitudes for “zooming in”, and higher altitudes to “zoom out”.

Then we calculate the altitude, by sampling the Simplex noise at a given x/y/z 3D coordinate:

Next, use the resulant altitude to calculate a display tile. Altitudes less than zero are water, altitudes up to 0.5 are grassland and above that a mountain is rendered:

That just leaves a render function, which simply needs to render one character per tile for the whole window:

Run the project (with cargo run), and you get something like this: 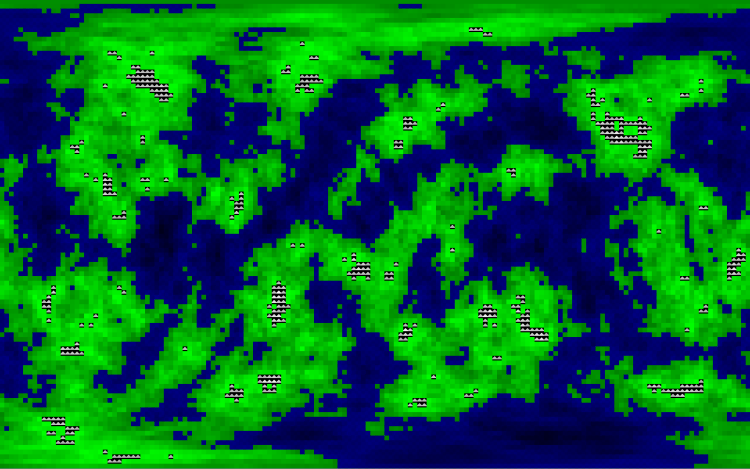 Note the polar distortion, because we’re not using a proper coordinate translator!

If you upload that to https://www.maptoglobe.com/, you have a lovely planet render: